For 6 years I have been traveling to Detroit once or twice a year.  I have seen a lot of changes in the downtown area and have always received great recommendations for dining.  This trip was no exception – four great meals during two days in Detroit, Southfield, Royal Oak and Fenton.

Republic
LOVED my lunch here!  They have a few lunch specials and I took advantage.  The Ploughman Lunch – pick 1 small plate and 1 sandwich – served in 20 minutes and the cost is $20.  I chose the Cheese Board as my starter – burrata and pimento cheese with toast points.  I ran out of toast and rather than asking for more, I just ate the rest with a fork – delicious!  Then I ordered the Duck Pastrami Dip, served medium rare with horseradish mayo, duck jus, horseradish cheddar and caramelized onion on a hoagie roll with housemade seasoned chips.  Loved it!  Guess I need to push dinner back as I won’t be hungry for a while! 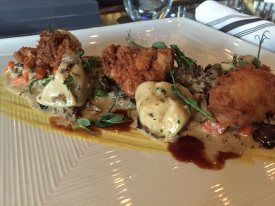 This was my first time in Royal Oak and I look forward to returning.   It’s got a lively downtown area with lots of shops and restaurants and I read in the Detroit Free Press that Bistro 82 was chosen as the number 2 best new restaurant in Detroit.  Royal Oak was only a 15 minute drive from my hotel and after I found a parking spot, I walked over and found a spot at the bar.  Their entire menu is presented via iPad.  I had my heart set on the scallops before I walked in but based on the bartender’s recommendation I went with the Sweetbread Tortellini with sausage, carrots and a Dijon bordelaise.  Perfect meal to end my day!

I have been coming to this tiny restaurant in Southfield for years.  It is my must stop restaurant in this area, whether I get to have just a few bites after a client dinner or if I get to eat an entire meal for lunch. There is something very unique about their Pad Thai – served with a lemon and yes, it is yellow in color.  My absolute favorite place for this dish.  Too bad I have to travel so far to enjoy it!

The Laundry
Of course I posted to Chowhound to ask where to eat on the way to Flint(my departure city) so big thank you to “coneywitheverything”.  I stopped by The Laundry on the way to the airport, sat outside in the beautiful weather(20 plus degrees cooler than Texas) and enjoyed a meal before my flight.  What did I get?  There were so many good choices but I settled on a very simple dish that can be super fantastic depending on how it is made – Chilaquiles.  They served their dish in a cast iron skillet, covered in cheese and my perfectly cooked fried egg.  On the inside was smoked pork, cilantro-lime crema, housemade salsa, black beans, tortillas and more cheese.  I wish I could get this dish in Dallas as they prepared it – it was that good!  As I paid I noticed a small bakeshop in the back and bought an oatmeal cookie on the way out for my flight(s) home. 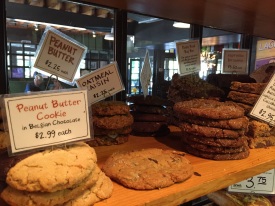 Marriott Southfield
Let me start with the good.  The hotel is in the process of a renovation.  The lobby is nice and new and they are upgrading the elevators.   The bad- the rooms are old(but being renovated in the future) and well, I had to have a chat with the very nice manager due to cleanliness issues.  Let’s leave it at that.  There are things the hotel cannot control like the roadwork being done that makes this hotel super inconvenient to get to right now(August 2015) but they can definitely set the standards on the level of cleanliness which they missed the mark on during my visit.  Yes, I’ll get points due to that conversation but I left completely grossed out with plans to stay at the SpringHill up the road or the Baronette Renaissance in Novi(an awesome hotel) during my next visit.